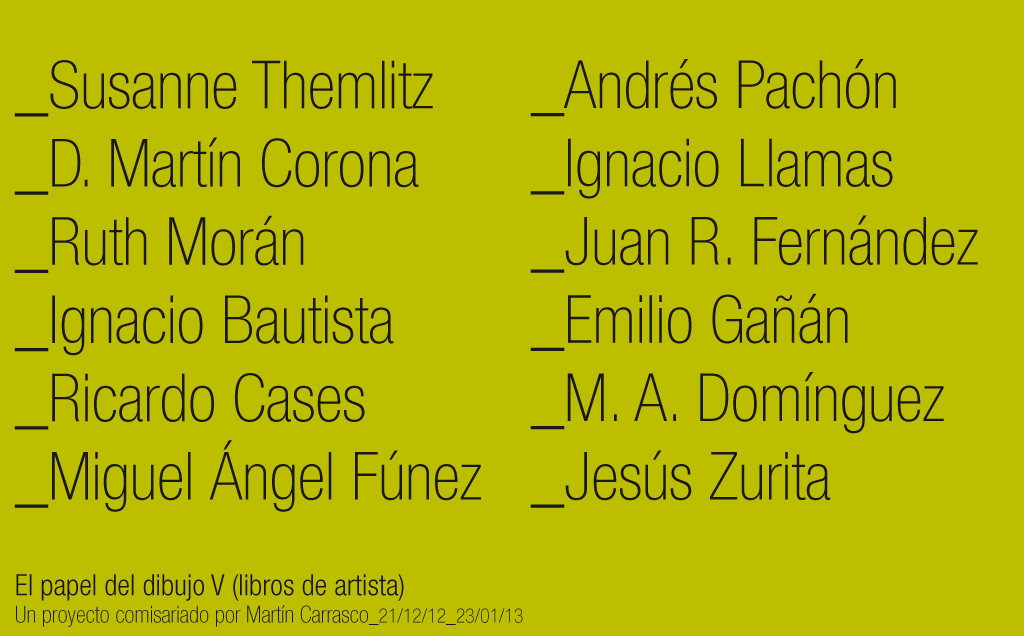 On the occasion of its tenth anniversary, Ángeles Baños Gallery has organized the exhibition “Artist’s books”, curated by Martín Carrasco. The sample is part of the generic project “The role of drawing V”, one of the programmatic lines that define the gallery with pieces by the artists:

Andrés Pachón (Madrid, 1985), Korubo File.
This anthropological archive presents the true images of the Amazon tribe Korubo. Images with documentary epidermis that are revealed as the hideout of the real, as the last stage of the documentary, because show us as we build the other including it in our speech in the world.

The audiovisual introduces us to the Korubo in the Westernized version, a digitized, polished, symmetrical mask. Their faces have been modeled in 3D for a facial recognition program, to subsequently adjust them in pursuit of their Apollonian version. An exercise in eugenics in pursuit of the discovery of the authentic Korubo. Photographs and drawings that complete the file lead us to the search for a virtual face through the anthropological imagination of the 19th century and European classical culture.

Jesús Zurita (Ceuta, 1974), artist’s book.
The meeting with the category of the sublime was not but a way to put names and surnames and explained why I was interested in some dizziness and drowning: God, evil, death and his objectification and the corpse. But this interest has not translated into a conscious act or a program, as I learned by porosity. It is something that you reach the soul and stays there. This links directly to the fascination of the 19th century and by aspects of the Romantic movement as the bizarre, the monstrous, superstition, and ultimately, the right to fear.

Loidys RAM (Havana, 1982), Living in the Netherlands: First Steps.
Living in the Netherlands: First Steps is an artist’s book containing 59 standardized test designed to measure intelligence. On every page printed exercises are logical thinking, where you select a single possible outcome between the figures marked by letters: a, b, c, d, e, f, g, h, i. This work is inspired by a personal experience in Amsterdam and is related to issues of integration, immigration and social control to the individual. The book contains no explanation about the printed figures and nor responses to raised IQ exercises, in this way the functional character has been eliminated and content is subverted by a verbal proposition through the title of the book.

Emilio Gañán (Plasencia, Cáceres, 1971), Green, 2012.
Green is a work that part of the book as an object. Action on the original form has been based on converting its square-shaped in an irregular prism t a sculptural field and using a basic element of my paintings.

Susanne Themlitz (Lisboa, 1968), Artist’s Book I, II and III.
Many do not want a stranger to look for them or to lead them the word, some have to fear of themselves…

Miguel Angel Fúnez (Madrid, 1988), Gene targenting I-III.
I question my forms, I like to experiment with new formats. In Gene targenting I-III, I use the box of acrylic glass, a transparent container, that I join with the content that I want to convey. Cubes, the drop-down, ultimately the Meccano set, they function as critical “fragments” on the permanent insistence of man to change the course of nature.

Ignacio Bautista (Madrid, 1982).
The role that is has been giving in modern times to the work of art as “presumed” means of representation and review for the real thing, this “in-covered” today by means of mass-media communication.

In these works, the artistic work does not go away, lies in the shadow of the machinery media, altering visual apparent normality and transparency, throwing suspicion on our own look, creating fissures in our standards of experience and, In short, as says Jacques Rancière, “changing frames and scales of what is visible and utterable, to produce cracks in the sensitive tissue of the perceptions and the dynamics of reactions”.

Daniel Martin Corona (Madrid, 1980).
It may be that within the instructions (in addition to the object that teach us to build, the steps to be followed for such a thing, etc.) were locked up the guidelines that direct the world we inhabit or when less certain characteristics. These are bad times for the critical spirit, a path towards simplification whereby there is no reflection towards the object but simply the object itself. A place in which the options are seemingly endless, however, these options appear quite marked and shorter (which does not spare any screws). This lack of critical spirit is caused by how comfortable that is to tell us what to do. In this way, life becomes a staging in which we ourselves appear as protagonists of life live, the scenario of such representation is a plain which reaches to the horizon, where future projects are diluted.

Claims of well-being in the short term, immediately, without having to go through the dilated experience procedures, full of unforeseen and drawbacks, renunciation so much slaughter as expected, life a state of continuous fun-oriented; they are symptoms of immaturity and childish thinking. A so kind and captivating situation in which most importantly is I pleased and immediate, a situation which we assimilate and alienates without any pressure or obligation: the only requirement is to let yourself go.

On the other hand, this way of thinking of the “I want one of those” undoes the consistency of the real, both in its abstract idea, talking about durability of thoughts, as in the fitness of things, since one-time things require banality and lightness in order to fulfill its mission, which is the throwaway.

This culture of excess, this obsession to do it all, have it all, see it all, is a product that transcends borders, exporting from the “developed” world to the rest of the planet, resulting in a capricious planetary Potpourri and denaturation of the differences, which has its own language (global), able to mutate according to the user and making part of the spectacle across the globe.

In this situation it is difficult to distinguish the boundaries between reality and fiction. This process of reification of the experience builds an enhanced reality, in which its main product, aimed at a global audience, is happiness.

Manuel Antonio Domínguez (Huelva, 1976), Drifts of MWH.
Who is the Man Without Head and why that name? It is a kind of alter ego of Manuel Antonio Domínguez, a particular utopia on which to build what is for my masculinity and as it should be. It is the title of my first project, from here I started to develop hints of different types of male buildings. The man without a head always has proven me the image of a person who rejects reality, consciousness, of emotional self-control.

Ignacio Llamas (Toledo, 1980), I’m dying.
“There is no object deeper, more mysterious, more fruitful, more dark, more dazzling than a window illuminated by a candle. What you can see the Sun is always less interesting that what happens behind the glass. In that bright or black hole live life, dream life, suffers life” Charles Baudelaire, Les fenêtres, petits poèmes in prose, 1864.